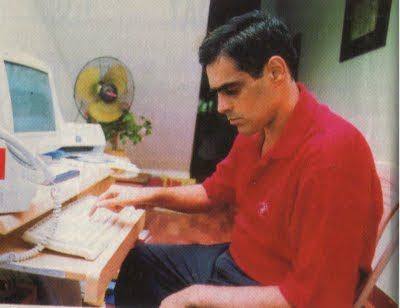 "My body is my prison, and my senses are the bars that imprison me." It's a telling comment on the nature of autism by 33-year-old Krishna Narayanan. Diagnosed at the age of four, he started conveying his feelings in writing to his mother at the age of 23. Since then, a whole new world of communication has opened up with his family and, through his books, with countless parents of autistic people. Krishna's first book, "Wasted Talent - Musings of an Autistic", gives a poignant insider's perspective on autism. Krishna sets an example of sensitivity, intelligence and, above all, great determination and hope.

Krishna's family lived in America at the time he was diagnosed. Although the hospital there insisted that he would not be able to respond, his mother refused to give up on the basis of lack of information on the ailment and set about teaching Krishna skills as basic as chewing. As autism renders imitative learning skills void, every action was an uphill task.

Krishna's mother, Jalaja Narayanan, herself a writer, says: "Teaching an autistic child is like making pathways in the brain. Every task accomplished is like a milestone and one worth exulting about. One of the first milestones was crossed when he was two-and-a-half. After an intense day of teaching him over and over again, he finally took one sip of orange juice instead of his usual milk." Although this seems a simple enough task for most of us, the nature of autism itself is to blame for the challenges.

Not much is known about what causes autism; if it were known, perhaps more could be done about it. Krishna mentions this in his book, "Autism is a complex disease marked by gripping fear, scorching tension, lack of coordination and little speech. More often than not, it is mistaken as insanity and sometimes even misdiagnosed. The difference between insanity and autism is that insanity means losing one's mind, whereas the autistic is fully aware." An autistic person may be extremely brilliant and possibly a genius in the making, but is unable to communicate due to lack of speech and poor coordination.

Although Krishna's learning to write was a major step forward, it has been the culmination of painstaking work that started right from childhood. With writing, he was able to tell his parents about what he had experienced but could never convey. They realised, among other things, why he used to shy away from touch, why he was afraid of strangers, why was rigid in his habits, how brushing his teeth or getting a haircut were excruciatingly painful. Even less monumental but nevertheless emotions came to light; the tantrums he made on one particular day, he revealed, were due to the turmoil he felt when he was being read about Sydney Carton's choice of love over life in Charles Dickens' "A Tale of Two Cities."

Krishna was developmentally delayed, but he has crossed milestones in flying colours. He has read Dickens, Austen, Dostoevsky, Tolstoy and Hugo, and has a passion for mathematics, instilled by his father who first introduced him to algebra, calculus, and non-linear differential equtions. Krishna later moved on to quantum physics and acoustics; in his first book, he even explains a parallel between relativity and autism.

A second book called "Quest; Search for a Quality Life", that Krishna has authored along with his mother, is being released soon, and he is in the process writing his third book, a novel. As for his future plans, Krishna writes: "So what is my future? I really don't know, but I can dream. The dreams make life worth living though the current reality is stark and dreary. On the other hand, dreams free the mind and let it fly in the wide space of the future."

Krishna Narayanan’s first book, Wasted Talent - Musings of an Autistic and Jalaja Narayanan’s book, From a Mother’s Heart – A Journal of Survival, Challenge, Hope are available at leading bookstores in the city. The new book, Quest; Search for a Quality Life is expected to be available soon.

Pic courtesy Third Eye
An edited version of this article was published in Madras Plus on June 26, 2004 .